The Ebola Orphans of Africa: International Adoption and the Kindness of Colleagues

During the September 22 event, Pilkerton recounted how he and his wife Amanda saw an article written about Ebola orphans and decided they wanted to adopt four children from Liberia. They originally planned to adopt one child but then discovered the child had three other siblings. Soon after, they learned Liberia had a moratorium on adoptions and they would not be able to adopt unless it was lifted.The Pilkertons’ quest for adoption led them on a journey that has taken them to the halls of the US Congress, the United Nations, the office of the Liberian President, and the studio of CNN. The moratorium on adoptions was eventually lifted in Liberia, but, unfortunately, their adoption did not go through. 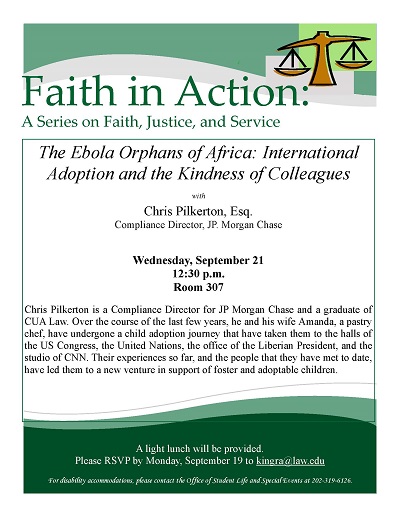 Pilkerton, Chris, "The Ebola Orphans of Africa: International Adoption and the Kindness of Colleagues" (2016). Faith In Action. 15.
https://scholarship.law.edu/faith_lectures/15