Grace in the Criminal Justice System

In 1999, Shon Hopwood stood before a federal judge and was sentenced to over twelve years in federal prison for his role in five bank robberies. As he related to an audience of students, professors, and staff members during the Faith in Action talk at the Columbus School of Law, the journey from that day to this one, in which he enjoys a teaching fellowship in Appellate Litigation at Georgetown, is a tale filled with no small amount of grace. During the February 18th event, Hopwood explained how while in prison, he began to teach himself the law and began writing legal briefs for other prisoners. "Not only did I have to learn the law, I had to learn to write, and I started to figure it out. I researched for days, weeks, months," said Hopwood. 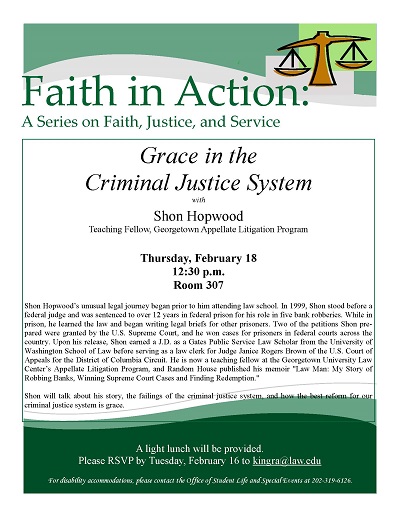