A Jesuit Vocation: A Call to the Frontiers of the Church

Father Conroy addressed an audience of faculty and students, relating the circuitous journey that led him to law school and then the seminary. Originally intending to practice and seek office in the U.S. Senate, a priestly vocation took Father Conroy in a different direction, but never far from the halls of justice and never for very long. He spoke of how each leg of his vocation—be it teaching in Jesuit high schools and acting as a campus minister at Georgetown, or representing Native-Americans at one point and also immigrants to the U.S. at another—called for a moment of discernment as to what he should do with his life. 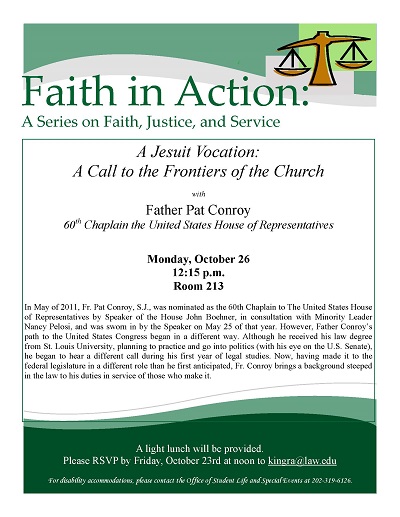 Conroy, Father Pat, "A Jesuit Vocation: A Call to the Frontiers of the Church" (2015). Faith In Action. 6.
https://scholarship.law.edu/faith_lectures/6