Benched: A Look into Judicial Nominations, It’s Past, Present, and Future

On November 4, 2019, Catholic Law’s American Constitution Society (ACS) hosted an evening lecture entitled Benched: A Look into Judicial Nominations, It’s Past, Present, and Future. Aimed at pulling back the curtain on the country’s judicial nomination process, the lecture was led by Jill Dash, Vice President of Strategic Engagement for the ACS and President of the Women’s Bar Association of the District of Columbia.

After a brief introduction by Eric Kim (3L), ACS Catholic Law Chapter President, Dash began the talk with a description of her department at the ACS. The ACS’s Strategic Engagement department was created in 2014 and focuses predominantly on what Dash referred to as “pipe line work”—creating network connections, getting people involved in ACS, and getting individuals interested in becoming judges. As Dash described it, “everything you care about […] all runs through the courts” so each seat matters. She then went on to speak more about the current climate of the judicial nomination process. 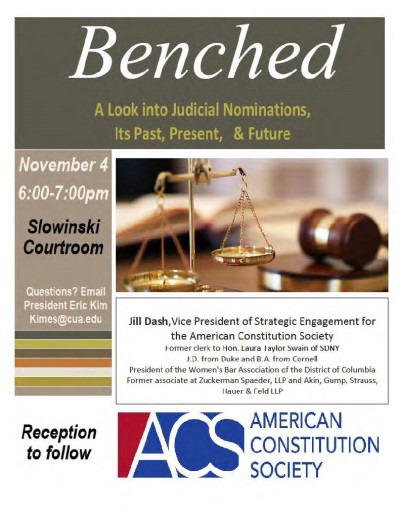