State Laws and the Fight against Child Sexual Exploitation on Backpage.com

The Communications Decency Act (CDA) was hotly debated before its eventual passage in 1996 because Congress’s first attempt to regulate pornography on the Internet raised difficult Constitutional questions about the reach, and limits, of the First Amendment. Nearly 20 years later, one of the law’s unfortunate aftereffects, according to Catholic University third-year law student Erin Callahan, is the legal continued existence of the adult pages of Backpage.com, a web site that carries advertising for the sexual trafficking of children and minors. Delivering the second Student Scholars Series lecture of the 2014-15 academic year on Feb. 25, Callahan made the argument that the adult section of Backpage.com should not be protected by the CDA because the site promotes a “speech act,” which is different from protected free speech. 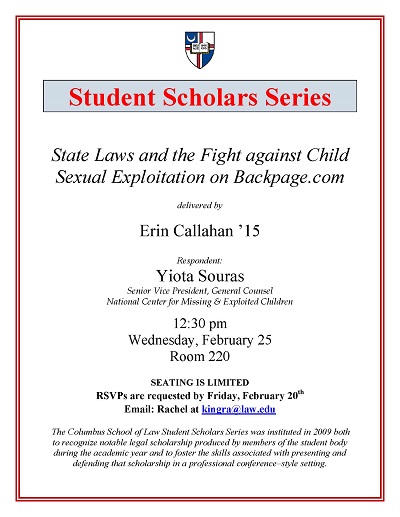