The FCC's Regulatory Mulligan: Exploring the Options in the Wake of a Failed D Block Auction

Valencia's presentation, adapted from his article that has been accepted for publication this spring in the North Carolina Journal of Law and Technology, recounted the issues at play in the FCC's attempted auction/sale of "D Block," a section of bandwidth with superior transmission characteristics that has previously been occupied by analog television transmissions. With the entire country transitioning by fits-and-starts away from analog to digital transmission of television signals, D Block spectrum is freeing up again. By FCC decree, the space can be auctioned off to the highest bidder, but with a major caveat: the licensee is required to work hand-in-hand with public-safety agencies to deploy a nationwide inoperable public-safety communications network. 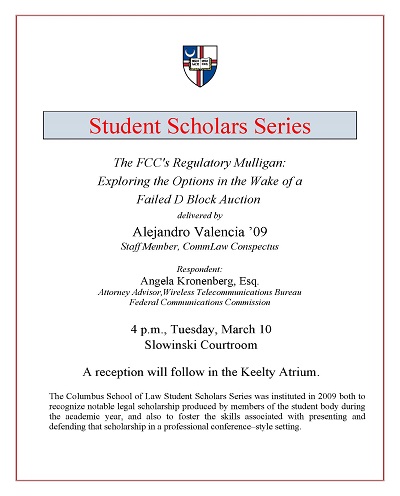