Our Sister's Keeper or a 'Kept Sister?' Commercial Sex Trafficking and Slavery: Implications of a Societal Response

Catholic University law Professor Mary Leary delivered the 2009 Mirror of Justice Lecture, sponsored by the Pope John Paul II Guild of Catholic Lawyers. She used to occasion to address the prevalence of sexual trafficking of women and children worldwide. Leary noted that 27 million people around the globe are involved in sex trafficking. In the U.S., it’s estimated that as many as 17,000 people are brought into the country each year for such purposes. Behind drug and gun smuggling, the trafficking in human sexual bondage is the third most profitable venture for organized crime. “Human sex trafficking is modern day slavery,” declared Leary, who spent a significant portion of her remarks drawing unsettling analogies between today’s practices and those of 150 years ago. The pre-Civil War slave trader reappears today as a prostitute’s pimp, Leary argued, observing that each made money from the suffering and degradation of others. 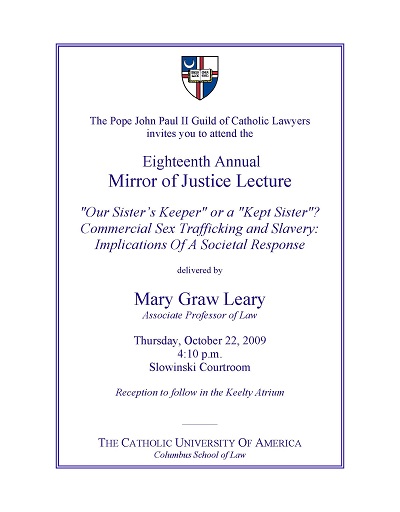